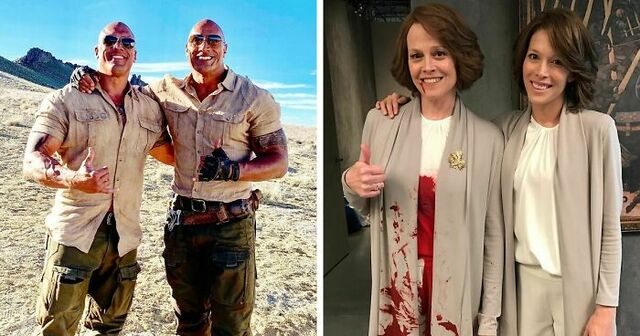 It’s rare nowadays to find an actor who does their own stunts. It’s not surprising, as it can be dangerous and risky. Professionals are best for this kind of work. I am referring to stunt doubles. But you can’t pick just any stuntman, and hope the audience doesn’t notice it’s not your favorite actor jumping out of a moving car or burning building. Doubles must look as close as possible to the actors. Sometimes, this is so obvious that you would think they were actually separated at birth.

We have today prepared a collection of actors with their stunt doubles. The similarities are stunning! See the gallery below! if you want more, make sure to read our earlier article here!

#1 The Rock And His Stunt Double On The Set Of Jumanji: The Next Level

#2 Sophie Turner With Her Stunt Double

#5 Tom Hardy With His Stunt Double On The Set Of Mad Max: Fury Road

#6 My Bloodrider Kim Fardy. I Wish I Could Show The World What U Have Done For Me And This Movie

#12 Why Have One Thor When You Can Have Two? Chris Hemsworth’s Equally Hot Stunt Double Shows Us How He Gets The Abs Of A God

#13 Elijah Woods With His Scale Double Kiran Shah On The Set Of The Lord Of The Rings: The Fellowship Of The Ring

She’s a mother, an athlete, and her movements are unlike anything I’ve seen before in a stunt performer. Thank you Stani for bringing your all, everyday and with such grace and kindness.

#18 So Much Credit To Casey, My Amazing Stunt Double On GOT. She Is Awesome

Gamora masks were tested by our stunt men. They were not only horrifyingly frightening, but also unwieldy. We decided to ditch them and use straight up Green face paint on our Stunties, or face replacement if necessary.

#29 Tom Hardy With His Stunt Double In The Survivor

Andy Ivanov, Ukrainian Artist, has created a heartbreaking comic about a green mermaid.

This Woman Decides To Give a Home For a Wild Baby...

10 Houseplants to Keep in Your Bedroom for Better Nights